The EU EUROsociAL+ Programme works to counter the impact of corrupt public officials on women and girls in Latin America. As a tribute to the survivors of these corrupt practices, we have heard their stories through art as a means to transform perceptions, as a vehicle to generate awareness and social transformation. The experience is presented to mark International Women's Day. 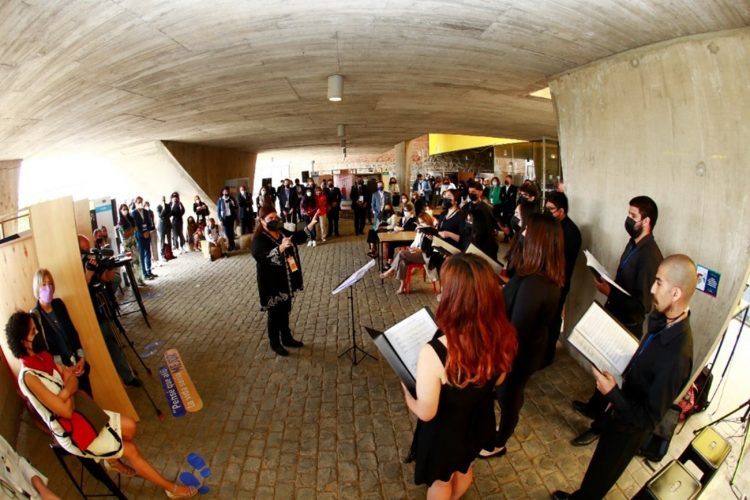 Sofía talks to an audience of judges, prosecutors, aid workers, finance officials, auditors and bodies that guarantee transparency, among others. The young woman, a student at the University of Valparaíso, is visibly moved as she tells the true story of a girl who gives birth while suffering from syphilis. The minor was a victim of a trafficking network and had been sexually exploited. The crime ring had operated with help from police officers, who received kickbacks from the pimps and had free sex with the women exploited. “How can someone who swore to protect us be so despicable?”, cries Sofía, putting herself in the girl’s shoes and urging more than 80 officials from Latin America and the European Union to take action with choral and drama performances, among the activities of the ‘Woman and corruption. Expression of pain and hope’ initiative, a set of artistic performances featured during the ‘Political and social pacts for a new Latin America’ event organised by EUROsociAL+  in Valparaíso (Chile) in January.

The ‘Women and corruption’ activity, organised by the Governance Area of EUROsociAL+ in the FIIAPP sought to identify, highlight, measure, prevent and combat the impact of corruption on women in Latin America. We have diagnosed and sought out solutions with members of the justice system, international and community organisations, helping to position the issue on national and international agendas, generating tools and promoting regulatory reform.

The impact of corrupt practices on women and girls in Latin America is more frequent and specific because of their gender and their vulnerable situation. Court officials who demand sex in exchange for favours, university professors who proposition their female students, police officers who receive kickbacks from prostitution rings and human trafficking networks, prison guards who sexually exploit girls and women … Some of these practices are isolated crimes, but others are part of systemic behaviours that must be identified and stamped out.

This has been a EUROsociAL+ objective for the last three years, a task finalised from 12 to 14 January during the aforementioned Valparaíso Meeting, where the spotlight shone on victims of corruption. We learned about their experiences through the initiative ‘Women and corruption. Expression of pain and hope’, a collaboration between EUROsociAL+, the District Institute for the Protection of Children and Youth of Bogotá (Idipron), the University of Valparaíso and Peruvian artist Aisha Asconiga.

These activities are designed to to use different forms of art to give voice to women and girls subjected to sexual extortion and corruption by trafficking and sexual exploitation networks. We wanted an initial overview of who they are, to understand their stories and share their experiences, to start discussions on the best strategies for fighting the crimes of which they were victims more effectively.

Art is a window, a repair mechanism for awareness, social and institutional transformation. It is also memory, an expression of resistance, pain and hope. Art should humanise us, forge new paths in the search for solutions with a different viewpoint. 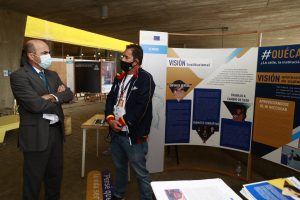 In this context, through three dynamics, different visual and musical visions inspired by Corruption and gender stories 8M narrated by the victims and compiled by EUROsociAL+.

Idipron provided the first dynamic. With the motto #quécaminorecorrer, three groups of people in Bogotá (Colombia) made drawings based on the stories ( download the drawings ) from three perspectives or paths, and feelings.

The first artistic creation was carried out in institutional area. Idipron’s communication area produced illustrations as a reaction to the victims’ stories, from a more technical point of view, as an institutional campaign. The second view was that of the victims, embodied in drawings made by girls who came from the Santa Fé district of Bogotá and who are subject to protective measures after having been victims of sexual exploitation. They have a particular view of the situations they are painting having experienced them first-hand. The third viewpoint is that of the street, of the boys and girls who live in the area surrounding the Castillo de las Artes, in the aforementioned Santa Fe district, a former hotbed of sexual exploitation, which has been witnessing abuse and mistreatment for years and now provides alternatives to young people through art. The young people who made these drawings live in an environment where many inhabitants are trapped by criminal organisations, some willingly, others by force. They have a thorough understanding of the problems and dilemmas.

Through the stories and illustrations, the stand coordinated by Carlos Marín, director of Idipron, showed those attending the Valparaíso Meeting what is needed in terms of public policies to address these problems and to raise awareness. Is it enough to be guided by institutions without consulting those who experience this type of situation in the first person? The victims have a more personal vision, they experience the pain of what is happening. When it comes to identifying #whatpathtotravel, the issue must be addressed not only from the point of view of the authorities, but also its connection with society. These crimes are often invisible and it is necessary to break social inertia against them.

The second dynamic was carried out by the Peruvian plastic artist Aisha Asconiga. Aisha explores the position of women in society and the violence associated with the mere fact of being a woman. In her work ‘When will I stop being a thing?’, a female figure shows how women are seen as things, as commodities in the collective subconscious, as a payment currency. Specifically, the work shows corrupt public officials affect women when extortion and sexual exploitation robs them of their freedom and their rights, and they are forced to pay with their own bodies. 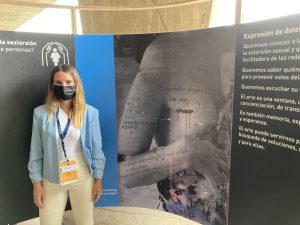 Peruvian artist Aisha Asconiga, with her work ‘When will I stop being a thing?’. Photo: EUROsociAL+

The artistic event culminated with a musical and theatrical performance (See Video ) ‘Mujer y Corrupción. Voices that denounce, songs of freedom’, by the Camerata Vocal de la Universidad de Valparaíso choir led by Ximena Soto. The music was interspersed with dramatic interpretations of stories based on the experience of girls, adolescents and women harmed by corruption.

Sofía, a member of the Camerata and the person with whom we introduced this story, explains how she has created art based on traumatic experiences: “These are shocking stories, but we need to show them to people because they happen every day. We must remember that this exists.” And the student continued: “How can we use art to deal with these social problems? Singing is more than being in tune and sounding great. It is also the message. Music moves you to feel more deeply. Some of the group felt nervous before we started, but we are delighted because our audience consisted of people who can do something to find solutions and we did our bit to urge them to do something. Artists have a responsibility to society; if you can use culture to contribute something, your the heart takes you forward, encourages you to keep going”. 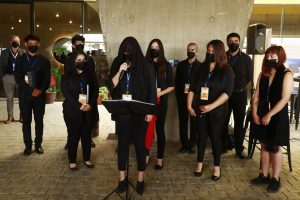 The Camerata Vocal de la Universidad de Valparaíso during its dramatisation of cases of corruption and gender’ Photo: EUROsociAL+