Working with men in criminal proceedings, part of the comprehensive approach to violence against women in Costa Rica

The Costa Rican Public Defender's Office has launched the “Comprehensive approach to violence against women: construction of new masculinities in men facing criminal proceedings for violence against women” project in association with the European Union’s EUROsociAL+ Programme and the technical assistance of the authors of this article, which summarises the legal, institutional and conceptual framework of the project and describes the Contexto–Costa Rica Programme that is being developed as its main deliverable. 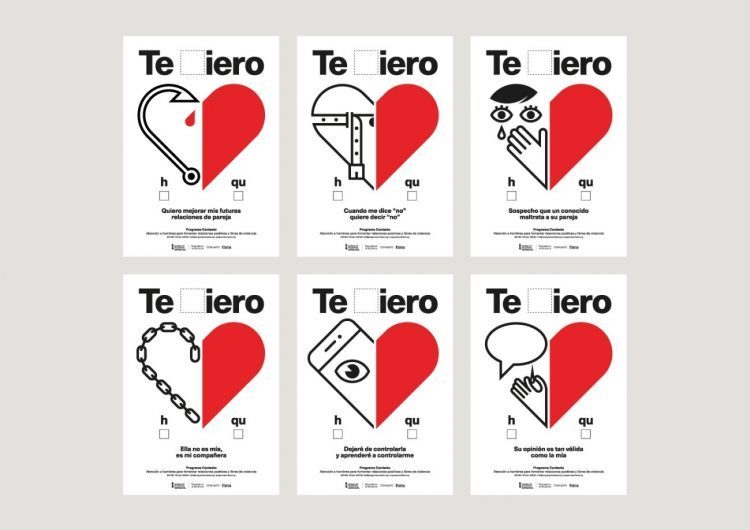 Image of the “I choose to want” campaign of the Contexto Program highlighting that the use of violence is always a choice.

The main aims of the project are the creation of a programme to comprehensively address violence against women by men facing criminal proceedings and the setting up of an inter-institutional network of alliances to ensure its coordinated operation.

Programmes working with men who commit gender violence against their partners or ex-partners are an important measure to combat violence against women and improve the safety and well-being of women and their children, complementing the services for the victims/survivors.

Recommendation 125.i. of the 1995 Platform for Action of the fourth UN World Conference on Women in Beijing urged governments, public administrations and community organisations to “offer, finance and promote therapy and rehabilitation programmes for the perpetrators of violence and to promote research to improve these therapies and rehabilitations in order to prevent the recurrence of this violence.”

Similarly, the Istanbul Convention signed in 2011, which since 1 August 2014 has been the basis of the European legal framework, devotes its Article 16 – Preventive action and treatment programmes to programmes for men who engage in gender violence. It should be noted that the agreement not only urges countries to create and support programmes for those who exercise gender violence, but also specifies that the safety and rights of the victims be a priority in the programmes and that they be developed in coordination with services for victims.

The corresponding legal framework in Latin America, the Inter-American Convention on the Prevention, Punishment, and Eradication of Violence against Women (Convention of Belém do Pará, 1994, entered into force in 1995), does not make specific mention of programmes for men who exercise violence against women. However, its Article 8 states “The States Parties agree to undertake progressively specific measures, including programmes: (…) b. to modify social and cultural patterns of conduct of men and women (…) to counteract prejudices, customs and all other practices which are based on the idea of the inferiority or superiority of either of the sexes or on the stereotyped roles for men and women which legitimize or exacerbate violence against women.”

In Costa Rica, Articles 10, 11 and 16 of the Penalisation of Violence against Women Act (Law No. 8589, 25/4/2007), cover work with men convicted of crimes of violence against women as an alternative punishment: “The ‘compliance with instructions’ sentence will consist of submitting to a ‘behaviour on release’ plan, which will be established by the judge who passes the sentence or by the judge executing the sentence and may contain the following instructions: (…) b) Submit the person to a specialised programme for offenders, aimed at controlling violent behaviour and to comprehensive psychological and psychiatric treatment. … Each year, the National Institute for Women and the Ministry of Justice will send the Supreme Court of Justice a list of accredited public and private institutions to which the competent judicial authority may refer for the fulfilment of this sentence.” (Article 16)

In order to comply with the legal mandate to accredit focus programmes for offenders, the INAMU created an Accreditation System[1] through which the guidelines that have to be met and applied by organisations to all focus programmes for offenders are established, as well as the evaluation activities that are carried out to demonstrate compliance with the requirements.

The aforementioned Criteria for the accreditation of focus programmes for offenders (INAMU, 2011) are broadly aligned with most of the international quality standards for focus programmes for male aggressors of gender violence that are summarised in the following section.

Different organisations and entities have published quality standards for work with men who commit gender violence, especially at an international level, mainly by associations and federations of these programmes, for example “The Respect Standard” (Respect, 2017), “Guidelines to Develop Standards for Programmes Working with Perpetrators of Domestic Violence” (WWP IN, 2018),Domestic and sexual violence perpetrator programmes: Article 16 of the Istanbul Convention (Council of Europe, 2014) [1]. Table 1 summarises the main quality criteria in which most of the mentioned standards concur.

Aims: to improve the safety of victims and bring an end to violence

Responsibility of the aggressor and the consequences. IntentCoordination with other institutions, services for victims

Coordination with all the institutions involved, participation in circuits

Safety of the victims (women and minors) must be a priority

Specific training in gender violence and focus on aggressors

Regular external technical supervision/adviceDuration of the work, evaluation and follow-up

Follow-up after one year recommended

To date, there is no institution in Costa Rica with current accreditation to offer a focus programme for offenders, neither is there a state budget to bear the costs of treatment. The “Men under Construction” programme for men with criminal charges for crimes under the Penalisation of Violence against Women Act, launched in 2013 by the Attorney General’s Office (answering to the Costa Rican Judicial Branch), ceased to operate in 2017.

The work model proposed to cover this need is an adaptation of the Contexto Programme (Contexto-Costa Rica) to the situation on the ground in the country, taking into account the specific legal and institutional framework, the international quality standards mentioned and the scientific evidence accumulated. The Contexto Programme is a gender violence research, training, action and prevention programme with a focus on working with the aggressor that has been in operation since 2006 at the Faculty of Psychology of the University of Valencia (Spain) [3].

Regarding the action taken, the priority objective is the psychosocial treatment of men who perpetrate, or are at risk of perpetrating, violence against their partners in order to facilitate a change in their behaviour and attitudes towards women and prevent future violence against their partners and children. The theoretical model that guides the design of the Contexto-Costa Rica Programme is the Ecological Model[4], an approach recommended by the World Health Organisation[5], the Centers for Disease Control and Prevention[6] and the WWP EN network[7], among other organisations. Based on this model, work with aggressors is designed to take into account the main risk factors and protective factors existing at different levels of analysis: personal, interpersonal, contextual and macrosocial [8]. Table 1 includes risk factors backed by scientific evidence at each of these levels that may be worked on directly or indirectly through the programme.

Table 1. Risk factors in the perpetration of violence in intimate relationships6

The programme is also based on the idea that violence against women is an eminently social problem that is maintained, to a large extent, by the tolerance of the environment of the people involved [7]. Based on this idea, the participant’s social context and their social networks is one of the elements considered central to the work. This differentiates this programme from those that fundamentally focus on individual and psychological aspects of the subjects.

The Contexto-Costa Rica Programme is structured in three phases: Evaluation, Action and Monitoring. The Evaluation Phase begins with the reception of men with problems related to violence against their partners and ends with the participant joining a work group if he meets the inclusion criteria. It lasts approximately a month and a half, in which standardised questionnaires and tests will be completed and three individual motivational interviews will be carried out as part of the Individualised Motivational Plan [8] that will run throughout the work.

The Action Phase lasts approximately six months (25 sessions depending on the pace of the group’s work). This phase will be structured in five modules with their corresponding activities. Although it will count five individual interviews, the work will be essentially group-based (10-12 people), the group being directed by two professionals specifically trained in gender violence and working with aggressors. In addition, there will be a work manual for the development of the Individualised Motivational Plan and for group work which will consist of an adaptation of the work manuals developed by the University of Valencia’s Contexto Programme (the necessary licence will be available for the use of this programme). In the group sessions, weekly work will be done on the recognition and minimisation of all risk factors present in the participants, with an attempt being made to enhance the protective factors. Issues such as emotional management, conflict resolution or social and communication skills (regular work elements in cognitive/behavioural programmes) will be worked on, discussion elements will be incorporated around the attitudes and values that enable the use of violence, specifically masculinity models (the most typical elements of programmes dealing with the gender perspective). As an innovative element of this programme and in line with the ecological perspective, activities will also be developed that involve the participant’s social network, since this can be a determining factor in the abandonment of violent behaviour.

The last phase of the programme is the Monitoring Phase. The results of numerous studies suggest the need to establish intensive and prolonged follow-up of cases[9]. This phase mainly involves offering additional help and advice to the participants after the conclusion of the work. This longer contact also allows for a more rigorous assessment of the effectiveness of the [10] programme in order to check whether the desired results have been achieved and are being maintained. This follow-up will be carried out every three months by telephone and every six months in person over a 12-month period.

The integration of the programme in the coordinated community response to violence against women is a fundamental project aim in order to guarantee that the Contexto–Costa Rica Programme contributes to the safety of women and children who are survivors of violence and is in line with the Istanbul Convention and the different quality standards that highlight the importance of the close collaboration between the programmes for aggressors and other services provided by the support network in the fight against violence against women (especially, with the support services for survivors).

In order to frame the project within the National Policy for Addressing and Preventing Violence against Women 2017-2032, known as PLANOVI and whose aims are to promote a change in the male chauvinism culture and promote non-violent masculinities that promote equality, highly productive meetings have already been held with the National Institute for Women (INAMU).

Parallel to the development of the Contexto-Costa Rica Programme, the inter-institutional network and partnerships with the relevant public and private entities and the referral and coordination mechanisms and protocols for the correct functioning of the programme will be established within the framework of national policy and existing support circuits in order to strengthen the safety of the women and children affected.

[9] Gracia, E. y Lila, M. (2015). Attitudes towards violence against women in the EU. Publications Office of the European Union.

Article by Marisol Lila, tenured professor of social psychology and director of the Contexto Programme, University of Valencia, Spain and Heinrich Geldschläger, Director of Research and International Projects, Conexus Association, Barcelona, Spain from the EURosociAL+ Programme