By Borja Díaz Rivillas, Senior Officer of Good Governance in the Democratic Governance Area of the European Union Programme EUROsociAL+, at the FIIAPP; and Ana Linda Solano López, expert on corruption and gender of EUROsociAL+ 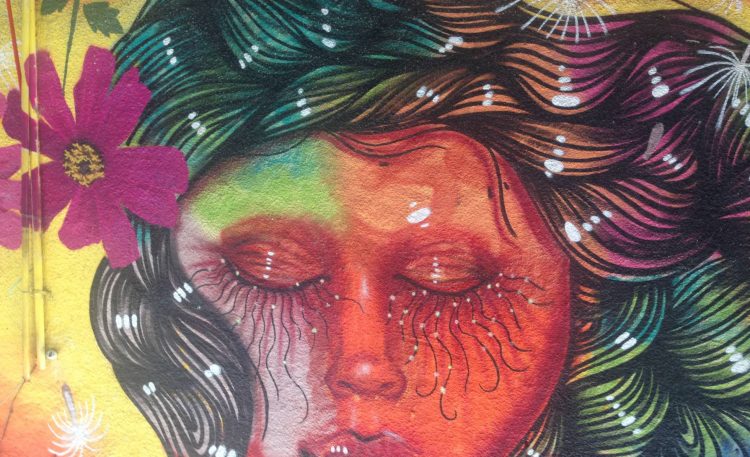 Women and girls in particular suffer the scourge of corruption. Mural in Rio de Janeiro. EUROsociAL+

When Ana María, a minor, gave birth in the hospital, the health personnel notified her relatives and contacted the Prosecutor’s Office to investigate the circumstances of her pregnancy. Her baby was very sick when it was born as a result of the syphilis from which she suffered. Ana María kept quiet. It was her mother who sounded the alert that the girl had been captured by a trafficking network.

The young woman was afraid. She was very aware that participants in the parties organised by her captors included policemen from the area with whom she and the other girls were forced to have sex. She felt she could not expect any help from the local authorities.

Ana María’s case is not an isolated one, but just one more example of the way corruption disproportionately affects women and girls in Latin America. Corruption in public officials linked to the phenomenon of trafficking for the purpose of sexual exploitation can take place along the entire criminal chain – at the place of origin or recruitment of the women, during transit and at the destination – but also within the justice and victim protection systems.

Corruption takes the form of the regular collection of money or sexual favours by officials who fail to carry out their surveillance duties, tip off criminals about investigations, falsify documentation or allow the passage of migrants. Sometimes, it is the officials themselves who control the illicit business or are members of the network.

Corruption being a crucial factor in human trafficking, its significance is in sharp contrast to the limited effectiveness of its prosecution. While action has been taken in various countries, there are still few structured policies or strategies in place for the prevention and investigation of these criminal practices.

The fight against the corruption associated with trafficking is the objective of one of the actions by the European Union’s EUROsociAL+ cooperation programme with Latin America. Specifically, joint work is being promoted among networks of anti-corruption and human trafficking prosecutors in the framework of the Ibero-American Association of Public Prosecutors (AIAMP) in order to identify the nature and scope of this problem and to be able to provide practical solutions.

Rings of protection around criminal networks

Most of the identified cases of corruption associated with trafficking involve facilitating the operation of the place of exploitation, as well as facilitating entry into the country for victims and, in general, issuing documentation without requirements being met.

Public agents establish rings of protection at different levels so that exploitation networks are consolidated, as Marcelo Colombo, head of Argentina’s Trafficking Prosecutor’s Office, tells us. The first such ring mainly involves police forces and municipal inspectors, who give protection to the organisations that control the places the exploitation occurs. “We see this corruption in the lack of controls on nightclubs, in illegal dealings in the area of migration, where minors are allowed to enter without permission, and in the blind eye turned to falsified documentation at the borders through which women and girls enter, in many cases tricked into ending up in trafficking networks,” details Sergio Rodríguez, head of the Anti-Corruption Prosecutor’s Office of Argentina.

“The fight against corruption and support for victims are necessary to break the criminal chain and regain the trust of the public.”

These acts can be isolated or form part of structures that facilitate the criminal economy, which makes it important to understand that there may be a second ring of protection in the Judiciary, including in the sphere of prosecutors and political forces. “We have tried and convicted numerous police officers and mayors. We had a case of a federal prosecutor who was protecting four places of sexual exploitation in association with one of the main gendarmes of the area, who controlled the business,” says Marcelo Colombo. “That’s why it’s important to look upwards for the big fish, the ones that are really benefiting,” he argues.

Peru also reflects this problem. In September 2019, a trafficking network operating under the protection of the head of the Criminal Division of the XV Police Macro-region of Madre de Dios was broken up. According to the indictment, in exchange for money, he was protecting the organisation and tipping it off regarding various anti-trafficking operations.

A third ring can occur when corrupt officials’ position of power allows them to control the criminal business. For example, the CICIG (International Commission against Impunity in Guatemala) Report on Human Trafficking for Sexual Exploitation in Guatemala identifies cases of officials directly engaged in the trafficking business, operating through front men. They owned centres of sexual exploitation and laundered their profits by investing in transport and other businesses.

A form of corruption that is even more difficult to detect, largely because it is “normalised” and carried on invisibly, is when the currency of payment for the facilitation of trafficking is not money but a sexual service imposed on the victim by agreement between the pimp and the public officials.

The complicity of the authority that frequents the places of exploitation also generates a strong sense of impunity on the part of the criminals and tends to make the victims too afraid to risk denouncing them. Aida Gatti, coordinator of the National Programme for the Rescue and Support of Victims of Trafficking with the Argentinian Ministry of Justice and Human Rights, knows this phenomenon well: “In many cases, victims of trafficking tell how police personnel, prosecutors and judges receive sexual favours in exchange for covering up the crimes. When the victims see how the public agents speak amicably with the pimps, this reinforces the situation of impunity. They do not escape because they do not know where to seek help.”

This form of sexual extortion, understood as an abuse of power to obtain sexual benefit, has a dual nature, as corruption and as a crime of sexual violence. This last condition presents challenges in terms of evidence, particularly with regard to the consent of the victims, and then there is stigmatisation to deal with, and the difficulties involved in protecting the women who dare to come forward to report these crimes.

A combined strategy against a complex problem

From the foregoing it can be deduced that breaking up criminal structures is not enough if the corruption that allowed them to operate is not also prosecuted. A starting point in the search for solutions is, therefore, to promote a double look at the areas of trafficking and corruption, generating joint protocols to address this problem within the prosecutor’s offices themselves.

Another key element is to have agencies trained to receive this type of complaint that then look at trafficking and corruption from the beginning of the investigation. It is also necessary to strengthen whistleblower protection mechanisms, encourage whistleblowing and carry out advertising campaigns to make this problem more visible.

Furthermore, prevention must be strengthened in the entities and places most prone to these crimes, through a risk analysis. An essential point is early detection of the corruption component in trafficking cases. It is appropriate to incorporate strategies specific to the fight against corruption, such as the monitoring of money or the seizure of assets. Investigation must not confine itself to the bottom of the criminal chain, but rather use analysis tools to detect the links between trafficking and public authorities or economic powers.

Finally, it is essential to make sexual extortion visible as a crime of corruption and to generate concrete actions to combat it. In this regard, the awareness of justice operators in anti-corruption areas must be raised and other training given, while at the same time including the variables associated with sexual violence against women in investigations of corruption.

Strengthening institutions, the fight against corruption and support for victims are therefore essential to breaking the criminal chain of trafficking and regain the trust of citizens.

Ana María decided, a year after giving birth, to collaborate with the authorities. She wants to help in the investigation of the network that exploited her to prevent other girls from going through the same thing. Despite her ordeal, she has regained confidence in justice and is even considering becoming a police officer in the future.