Within the framework of the International Day of Women and Girls in Science, we interview Andrea Giraldo Sevilla, Dominique Ferretti and Leonardo Espinosa Leal, experts from EUROsociAL+ who are conducting a study on gender gaps in the Information and Communication Technologies sector in the Dominican Republic. 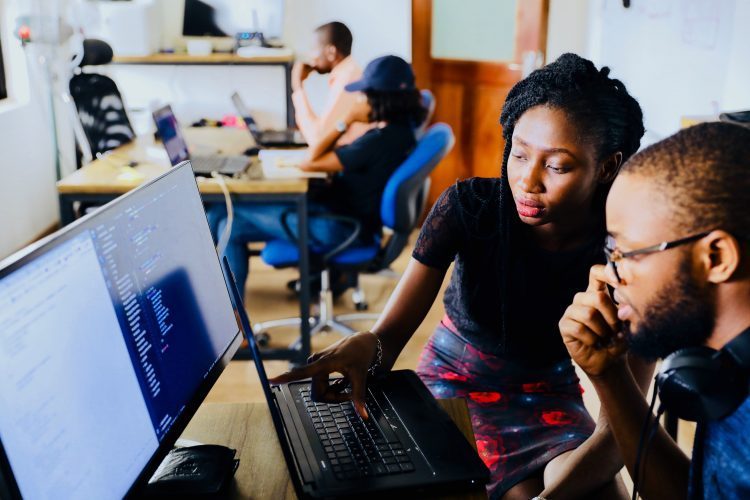 What is the name of the study that you are making with the National Statistics Office of the Dominican Republic and what is its goal?

The study is called “Study on the analysis and quantification of the different variables of gender gaps in the labour sector of Information and Communication Technologies (ICT)”.

The aim is to develop a diagnostic investigation that analyses and quantifies the various variables that denote the existence of a gender gap in the Information and Communication Technologies sector related to employment.

Likewise, we seek to experience their associations with ICT training, as well as some informal features such as the family composition of women employed in the technology sector and other socio-economic factors, for monitoring, as well as the evaluation of public policies on the subject and its use by the general population.

Why is it important to make a study of gender gaps in the technology sector in the context of the post-pandemic?

Our first question is, can we talk about post-pandemic? One of the first conclusions we reached was that it is too early to determine a (whether there was a) “post-pandemic” momentum. A “post-pandemic” analysis could be considered when the number of infections and their risks are stabilised.

Therefore, we limit ourselves to studying the trends, creating a framework for policy, survey and data analysis, reviewing the data cycle from the creation of the survey to its calculation and visualisation, and making “associations” between the different variables. At this point, we are not in a position to make “causal relationships” since for this it is necessary to complement the calculation with quantitative and qualitative studies (such as randomisation and ethnographies).

To carry out this 360º analysis, it is vital to bring an interdisciplinary team to bear on data that goes from the analysis of surveys and the systematisation of such data to identify gender bias, to the use of data science to extract and visualise this data in order to understand and analyse phenomena and trends: “one bias hides another bias” (one gap hides another gap).

Likewise, we have carried out a logical framework of analysis, which we would like to test during the study with respect to formal and informal-cultural socio-economic factors identified during the diagnosis. We seek to see the gaps in order to identify what is “invisible” and remains to be calculated, and how to do it, that is, a co-development of indicators.

At this point, our biggest challenge is not the “post-pandemic”, but to bring the high expectations in data science and big data “to ground”, and to what extent it can answer the initial questions. To this end, to see where our limits lie and be very careful with our own biases. Above all, beyond answers, the interesting thing will be what new questions it will bring, being aware that “one gap hides another gap.”

You mention the need to make a 360º analysis, how is it possible and why?

A 360º analysis is necessary given the need for interdisciplinary, inter-sectional and inter-sectoral analysis of gender in statistics and public policies, as well as in the labour sector. They also help us reduce risks of bias in our study, through continuous questioning and co-construction with the national team from the National Statistics Office and inter-ministerial technical teams.

For a 360º analysis, it is necessary that, as a team, the experiences and training should be complementary and at the same time we cover different disciplines and skills. For example, in our case:

Andrea Giraldo Sevilla is an engineer with an interest and specialisation not only in systems engineering and management but also in development anthropology (a fusion between anthropology and development economics), with extensive experience in technologies and innovation (artificial intelligence, data science and pedagogical-technological) and STEM & Gender.

Another of our researchers is a doctor in neuroscience, a researcher in cognitive sciences and psycholinguistics. Her research and experience deals with how indicators vary according to socio-economic and/or ecological conditions.

Dominique Ferretti is an economist with knowledge in the area of development in Latin America, whose work is oriented around and concerned with the statistical analysis of public policies to identify gender gaps.

Leonardo Espinosa Leal has a PhD in computational physics and is a data scientist with a wide range of research interests that include, among other things, areas such as autonomous intelligent machines, big data mining and the philosophy of artificial intelligence.

We could say that we comprise an interdisciplinary team with varied skills and mentalities, which are complementary and constantly questioning. Likewise, it is a joint effort with the National Statistics Office (ONE) of the Dominican Republic, coordinated by Yanelkis Fernández and Marcia Contreras, and made up of technical and professional personnel not only from the ONE but from different ministries of the Dominican Republic.

How does this study fit into the national strategy of the Dominican Republic?

The Dominican Republic has made several achievements in regulatory frameworks for gender equality in recent years, among which of particular note the coverage and recognition of women’s labour rights in the Constitution and the Labour Code with the ratification of the conventions of ILO, the General Education Law 66-97 and the Ten-Year Education Plan with the inclusion of human rights in non-discrimination, as well as decree 164-13 of MSMEs in which the Registry of State providers has been updated prioritising companies owned or with >50% female shareholding.

This study itself intersects the National Development Strategy (END)[1], the National Plan for Gender Equality and Equity 2020-2030[2] (PLANEG III) and Government Priorities 2020-2024 towards digital transformation[3].

What stage of the study are you at and what are the next steps?

As short-term results, we seek to provide a framework for survey and data analysis, strategies for cycles and data hygiene, and to increase national technical capacities not only in calculation but in carrying out gender-sensitive surveys and calculations for upcoming public polling exercises.

At the end of the study we seek not only to publish it, but also to take a first step towards the harmonisation and interrelation of the databases provided, as well as the continuation and improvement of this research-action by the technical and scientific community.

At this time, we are in the pre-diagnosis stage, which we will present in a webinar organised by the ONE and the National Statistics School (ENE) on 9 March. This webinar, aimed at technical and professional personnel from the Dominican Republic and other Latin American countries, seeks to take a first step in raising awareness, as well as, based on the pre-diagnosis, to present the methodology of the logical framework of data analysis developed, the result of the pre-diagnosis of both the surveys and the databases.

As a next step, we will move on to the diagnosis, which will include the pilot of the analyses, the completion of a matrix of public policies —as well as the completion of the pilot database— and the results of the diagnosis. With this, we seek not only to provide recommendations and the development of indicators, but also a visualisation of such data.

Finally, we plan to carry out technical training in April envisaged as being on a personal attendance basis in the Dominican Republic, coordinated by ENE, aimed at technical personnel and developed by the project team based on the results and recommendations of the study. Our goal is that this training contributes to the replicability and improvement of the exercise.

[1] For more information, in END, see: axis 3 Sustainable, Integrative and Competitive Economy; general objective 3.3. Competitiveness and innovation in an environment favourable to cooperation and social responsibility; the specific objective 3.3.4 “Strengthen the national system of science, technology and innovation to respond to the economic, social and cultural demands of the nation and promote insertion in the society and economy of knowledge.

[3] General Objective 1. Ensuring social inclusion: Connect the unconnected to close digital gaps, General Objective 2. Developing capacities: Ensure the development of knowledge and skills to have a prepared workforce, digitally empowered citizens and the social appropriation of technologies in the population.